If you’ve ever visited the state of Alabama, you’re well-aware of the region’s gorgeous scenery, diverse economy, and rich history. It’s often referred to as the Yellowhammer State, the Heart of Dixie, and the Cotton State. And rightly so, as this southern state is home to massive agriculture industry. In fact, it’s so large that it contributes over $70 billion to Alabama’s annual economy. Some of the top commodities from this state include cattle ranching, cotton production, and soybean crops. Additionally, Alabama is recognized nationally for its broiler chickens, catfish, and peanuts.

And regardless of what product these agricultural industries produce, they all rely on one similar thing: metal buildings. These structures are the only construction methods flexible enough to be useful in almost any commercial endeavor. For example, it doesn’t matter whether you need to store harvested peanuts or process cotton; custom metal buildings are some of the most cost-effective structures available. Wooden structures simply can’t compete with our building prices!

Alabama is no stranger to nasty weather events, including massive thunderstorms, torrential rains, tornadoes, and hurricanes. Between 1953 and 2019, the state noted a whopping 87 major natural disasters.

In 2020, Hurricane Sally stalled over Alabama’s gulf, destroying structures, causing extensive flooding, and severely damaging crops. One of the worst hits was the peanut industry, with many farmers losing years of crops.

Heavy rainfall in Elba, Alabama, caused the worst flooding the state had ever seen. During this disaster, it’s estimated that the region received over 30 inches of rain over three days.

A massive outbreak of tornadoes occurred in the US over a 24-hour timeframe. It is estimated that the area saw nearly 150 confirmed tornados in 13 states, including Alabama. This disaster resulted in millions in damages and hundreds of fatalities.

• The Storm of the Century

In 1993, a large winter storm formed over the Gulf of Mexico and moved into the region, dropping over 16 inches of snow along with record-breaking low temperatures.

In 94, a major ice storm struck the southeastern US, causing enormous damages to the state of Alabama. Homes went without power for as long as a month, and the damages were estimated to top over 3 billion dollars worth of damage.

In 2004, Hurricane Ivan caused widespread damage in Alabama, causing over 18 billion dollars in damages and over 120 fatalities.

Just a year later, Hurricane Katrina made landfall, becoming the largest hurricane ever to make landfall. It is also regarded as one of the costliest natural disasters in history, with recorded damages coming in at 108 billion dollars. During this event, over 22 counties in Alabama were declared disaster areas.

In 1916 a massive 5.1 earthquake struck northern Alabama, causing buildings to collapsing chimneys and wells. Although no one was killed in this disaster, it is still regarded as one of the strongest earthquakes to ever hit the state. 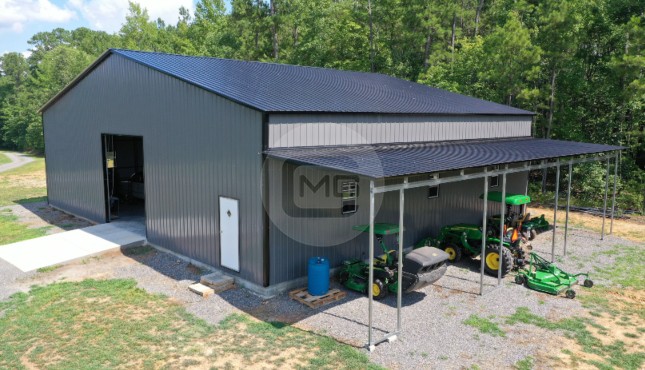 Metal buildings are a fundamental aspect of the agriculture industry across Alabama. These structures allow ranchers and farmers to protect their food supplies, equipment, and even livestock from the elements. Without the advantages Alabama metal buildings provide, many industries would struggle to get their products to the market.

And combining these logistical issues with frequent violent weather patterns, it’s no surprise why so many Alabama industries have turned to steel structures as their construction method of choice.

For fans of DIY projects and weekend renovations, you’ve come to the right place! We are proud to offer our premium metal building kits! These kits come with everything you’d see in our traditional metal buildings, except you install it yourself for a discount! It’s fantastic for those that don’t have the time to wait around for an installation crew and a perfect way to hone your handyman skills!

And did we mention that these buildings are incredibly customizable? In fact, almost every aspect of these structures can be tailored to your needs, from the trim colors down to the types of roofing systems. Design, customize, and install your own building on your own time with our kits!

For residents of the Yellowhammer State, there has never been a better time to prepare for next year’s storm season! Our metal buildings are affordable, easily constructed, and made to stand up to the worst Mother Nature can conjure. It doesn’t matter whether you’re a resident of Alabama or part of a commercial enterprise; these structures can save you money before, during, and long after construction.

If you’ve been batting around the idea of purchasing your dream building, we’re here to help! We have a dedicated team of building experts ready to assist you in designing, customizing, and installing your new building. We have the skill and experience to get the job done and done right! From small residential sheds to enormous industrial warehouses! Give us a call today at  (980) 223-3072.